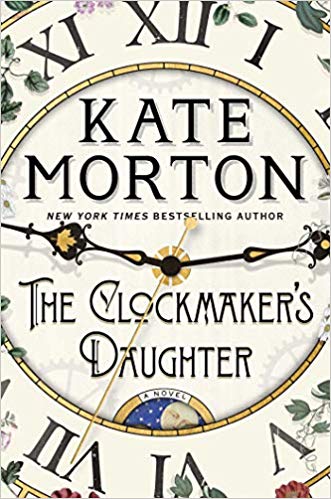 For the month of October, I chose two books for my Book of the Month picks (because I honestly have no self-control). The first one was The Lies We Told. And the second one was The Clockmaker’s Daughter. Here is the thing that I really love about Book of the Month – I find myself picking books that I probably wouldn’t have read otherwise and it has really encouraged me to try new types of books. I had seen some things about The Clockmaker’s Daughter coming out, but I would have never bought it if it hadn’t been a book of the month pick. It just wasn’t something that I would normally read, but I am so glad I did! I think maybe this would go under the historical fiction category, but it bounces back and forth between present and past.

In the summer of 1862, a group of young artists decided to spend the summer at Birchwood Manor, a country cottage owned by Edward Ratcliffe, one of the artists. But soon after they arrive, one of the women is murdered, another woman is missing and a precious family jewel is gone.

In present time, Elodie Winslow is an archivist in London, who begins working on a box of items that were forgotten about. In that box was a leather satchel containing a photograph of a woman and a sketchbook.  When she looks at the sketchbook, there is a drawing of an old cottage that is so familiar to her, but she doesn’t quite know why. Elodie makes it her mission to find out who the woman in the photograph is, if and how the satchel, the photograph, and the sketchbook are all connected, and why she feels so connected to the house in the sketch.

This book was so beautifully written. There were several lines that I had to stop and re-read because I loved the way it was written. And there is a LOT to it in more ways than one. There are a lot of different story lines that take place in several different time periods. And I love the way the characters weaved together in some way or another. I will say there are several points of view in this and a lot of characters. BUT stick with it. It will all make sense, I promise.

There is a little bit of everything in this book – mystery, death, romance, arts, theft, passion, loss, grief…

Now one thing I want to note – my mom only likes things that can really happen (books, movies, etc), and there is definitely a … let’s call it a supernatural element to the story. So if you are like my mom, this might not be the book for you.

Have you read The Clockmaker’s Daughter? If not, I highly recommend it!