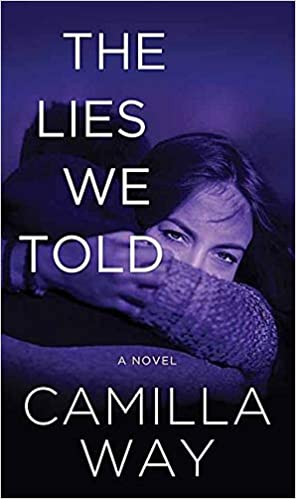 The Lies We Told is one of two books I got for my October Book of the Month (the second one was The Clockmaker’s Daughter, which I am reading now). This was a super crazy thriller by Camilla Way. And I thoroughly enjoyed it.

The Lies We Told follows two different storylines. The first storyline follows Beth beginning in the 1980s. She and her husband have a daughter, Hannah, but there is something very not right about her. In fact, she scares them a bit. She seems to have no emotion and delights in hurting others.

The other storyline follows Clara. She lives in London with her boyfriend Luke. When the book starts, Luke has not come home the night before, but Clara is trying to not be an overly clingy girlfriend. But then he doesn’t show up for work the next day. And he misses an important meeting at work for a promotion. And none of his friends or family have seen or heard from him. On the outside, Luke seems like the perfect guy from the perfect family. But as they begin to look for Luke, it turns out he isn’t so perfect and neither is his family. Lies that were told have put Luke in danger, and there is a race to find him before it is too late.

So I’ve said this before, but I love it when I can’t guess the ending. There were lots of twists and turns, and I had 100 pages left and had absolutely no idea where it was going, which was awesome! Because it was two different storylines, I knew they were going to intersect in some way, but I just couldn’t quite put it together. And it definitely had a major creepy factor to it too.

And let me just say, the opening line of this book I was like WTF!! And was totally hooked. I read it multiple times like DID I READ THAT RIGHT?? This is the second book by Camilla Way, so I am looking forward to reading her first Watching Edie at some point.

Have you read The Lies We Told? If you haven’t, you should definitely add it to your list!