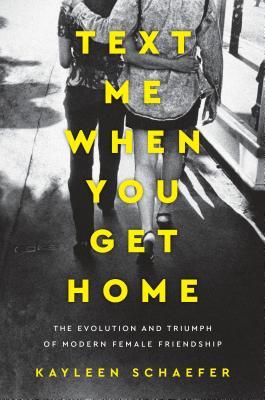 I had no issues with the writing, but I also wasn’t highly impressed by it. For the most part, it was an engaging and easy read, but I didn’t always enjoy the author’s voice or identify with her perspective. A lot of this book focuses on pop culture, which was less interesting to me than the less elaborated personal stories and sociological information presented on the value of female friendships.

I had very high hopes for this book and to be honest it did let me down a bit. I wanted this to be an examination of women’s friendships in real life and this focused more on pop culture and the author’s own experiences, which were very different than my own. I grew up in a home where my mother had many female friends and where I was taught the value of female friendships. A lot of what the author had to say about prioritizing relationships with men over women was just not what I’ve experienced in life. It made it hard for me to connect with the author and her point of view.

While this is a good book on female friendship, particularly as it’s displayed in movies and on television, it wasn’t the book I was hoping for. It took me quite a while to read it, as I didn’t find it particularly compelling. It was, however, an easy read, and one I’d be likely to recommend to someone looking for an examination of female friendships in relation to pop culture.

For too long, women have been told that we are terrible at being friends, that we can’t help being cruel or competitive, or that we inevitably abandon each other for romantic partners. But we are rejecting those stereotypes and reclaiming the power of female friendship.

In Text Me When You Get Home, journalist Kayleen Schaefer interviews more than one hundred women about their BFFs, soulmates, girl gangs, and queens while tracing this cultural shift through the lens of pop culture. Our love for each other is reflected in Abbi and Ilana, Issa and Molly, #squadgoals, the acclaim of Girls Trip and Big Little Lies, and Galentine’s Day.

Schaefer also includes her own history of grappling with a world that told her to rely on men before she realized that her true source of support came from a strong tribe of women. Her personal narrative and celebration of her own relationships weaves throughout the evolution of female friendship on-screen, a serious look at how women have come to value one another and our relationships.

Text Me When You Get Home is a validation that has never existed before. A thoughtful, heart-soaring, deeply reported look at how women are taking a stand for their friendships and not letting go.