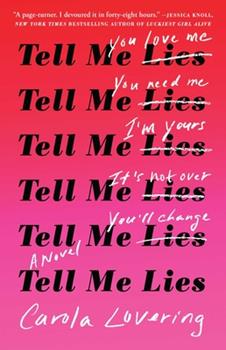 I recently finished Tell Me Lies, which is the first book by author Carola Lovering, and let me tell you – this book was crazy. It bordered on disturbing because one of the main characters is such a piece of work.

Lucy first meets Stephen at the beginning of her freshman in college in California. Lucy wanted to get as far away as possible from her life on the East coast and her mother, who she cannot forgive for her betrayal which she can’t talk about with anyone. Stephen isn’t the most handsome or has the best body, but he is confident, charming, and complicated, and Lucy is drawn to him in a way that she doesn’t understand. Stephen is also from the East coast, not far from where Lucy grew up and is also trying to forget about his past life. Although she turns down his initial offers, eventually she gives in to his charm.

The two date off and on throughout Lucy’s time in college (and beyond), and although Lucy knows there is something about Stephen that she can’t trust, she also is unable to stay away from him and is drawn deeper and deeper into his trap.

The book alternates between Lucy and Stephen’s perspectives and follows their story from the beginning of Lucy’s college days to a few years post-graduation.

This book was really crazy. It is really psychological, but not in a thriller sort of way. It is interesting because you always read & watch movies about great relationships – the ones that end with happily ever after, the great romances. But what about the ones that don’t? And what about the really unhealthy ones? Lucy and Stephen’s relationship is really unhealthy – in fact, I would call it toxic.

The author did such a good job writing Stephen’s point of view! I loved to hate him. and I just wanted to scream at the book, “WHAT ARE YOU DOING??” so many times. I think that if you find yourself wanting to scream and slap a character in a book, then the author has really done her or his job.

So, have you read Tell Me Lies? If yes, what did you think? If not, you should definitely add it to your to read list!