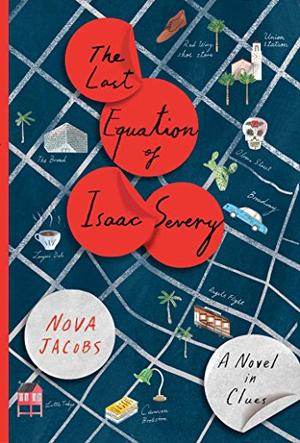 I recently finished another book on my reading list (which I am still not done with because other books keep getting in the way!) – The Last Equation of Isaac Severy. And I really enjoyed it! I would classify it as a mystery – it even says on the cover “A Novel in Clues” which made me really excited! I love a good mystery. This was actually a Book of the Month pick before I ever joined, but I had written it down (in my crazy extensive Note that I have on my phone).

Isaac Severy was a genius mathematician who suddenly died by apparent suicide, leaving his family wondering what happened. After his death, his granddaughter Hazel,  a failing bookstore owner, received a letter postmarked before his death. In his letter, Isaac tells Hazel that people are after him, leads her to believe that perhaps his death wasn’t a suicide, and telling her she must destroy his work and find and deliver his hidden last equation to his trusted colleague before anyone else can get to it. Hazel must figure out complex clues left by her grandfather, and the more she learns, the more dangerous it becomes.

Although Hazel is really the main focus, the book is also told from the perspective of her brother Gregory, a cop who has a lot of secrets, and Isaac’s son Phillip, a string theory physicist who struggled with needing his father’s approval, all who are dealing with Isaac’s death and the aftermath.

I really love mysteries, and although I love a good thriller, sometimes I like sinking my teeth into an actual mystery.  The Last Equation of Isaac Severy reminded me a little bit of The DaVinci Code – a granddaughter is trying to find out what happened to her grandfather and she is following the clues to figure it out. However, it wasn’t nearly as action-packed as The DaVinci Code, but I am not really into the action so I didn’t find that as a bad thing. This book was super smart (most of the Severy family are geniuses) and I read it really fast.

So, have you read The Last Equation of Isaac Severy? If so, what did you think? If not, you should definitely add it to your reading list!